There are currently 63,000 Plus People Playing Resident Evil 7: Biohazard In VR 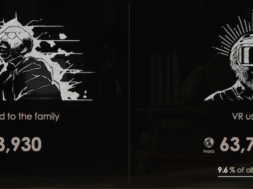 There are currently 63,000 Plus People Playing Resident Evil 7: Biohazard In VR

Resident Evil 7: Biohazard has made a big splash in the gaming community. It’s been a well established franchise for quite some time now with multiple iterations of the game.

The premise of Resident Evil 7: Biohazard revolves around a protagonist by the name of Ethan Winters who is searching for his missing wife named Mia. On his travels Ethan was led to a derelict plantation mansion, which is home to the Baker family. Mia has been missing for three years at this point. When he arrives he finds Mia imprisoned in the basement and warns Ethan that he must escape before “Daddy” finds him. We won’t spoil the rest.

According to Resident Evil’s update site, there are currently over 63,000+ players experiencing the game in VR. That is around 9.6% of all Resident Evil 7: Biohazard players which is quite amazing. There are 663,930 players of this game world wide. We expect these numbers to grow substantially over a short period of time.

Experiencing this game in virtual reality is quite exhilarating. Resident evil games are scary as it is in 2D. But by adding the VR component to the game, the experience is heightened by ten folds. You become more aware of your surroundings and examine objects a little more thoroughly.

If you have a knack for scary games, this is definitely a game worthy of checking out on PlayStation VR. But be ready to expect the unexpected.