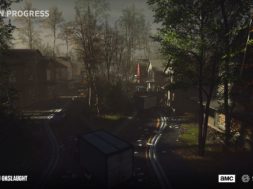 Currently, the market is flooded with a variety of VR zombie games. it is actually one of the more popular genre themes within the virtual world. But this time, Survios (creators of Raw Data) wanted to take a stab at the genre in partnership with AMC with a title called The Walking Dead Onslaught.

In the game, Onslaught will introduce the “most visceral combat experience” that Survios has built to date. You will scavenge and wield an arsenal of iconic melee and ranged weapons using real-motion VR mechanics – and experience the variety of their graphic end results.

Some of the current planned features:

The Walking Dead Onslaught is set to make its debut sometime this fall in 2019 on both the Oculus Rift and HTC Vive. The game is a working title and is still a work in progress but it does sound promising.

There have been numerous attempts to create a quality zombie VR game and very few titles have stood out in recent time. We will soon see if Survios can deliver a meaningful apocalyptic zombie VR game that can make a name for itself in the gaming community.