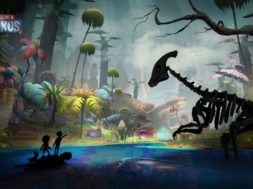 There’s a lot of fascination going on within the virtual reality industry over digital animations. Companies such as Baobab Studios have formed a team of animators from the likes of Pixar and DreamWorks to release experimental short stories like Invasion! and Asteroids! in the immersive space. The Virtual Reality Company looks to do the same with their own experimental digital animation series called Raising A Rukus.

This digitally animated short story will take you through a VR adventure where two siblings and their mischievous pet dog Ruckus travel through different worlds and have magical adventures together.

According to VRC’s co-founder and CCO Robert Stromberg, Raising A Rukus will be a “first-of-its-kind animated family entertainment for virtual reality.” In a recent interview with Variety Stromberg said, “It’s like watching a Pixar short — except that you are immersed in it. For the first time, we are taking a ride with these characters.”

Each episode in the Raising A Rukus series will be 12 minutes in length. Some will feature branched narrations which will allow viewers to experience the story from the perspective of the brother or the sister.

Stromberg is a veteran in the Hollywood industry winning two Academy Awards as the art director for Avatar (not the The Last Air Bender movie). “It’s (VR) a very powerful medium,” Stromber stated. “It’s too powerful to just go away. Over time, people will recognize its power. I’m really proud to be in a position with VRC that we are taking these leaps into the darkness. When the sun rises in VR, we will be there standing.”

The company has raised more than $25 million in the past year with a recent partnership to Hollywood’s iconic director, Steven Spielberg. Raising A Ruckus will premiere in theaters in Canada this spring, with wider distribution goals across North America later this year.