Home VR Games The Spy Who Shrunk Me Set To Launch On December 18th With A VR Release In 2019
VR Games
VR News
December 6, 2018 Griffin Streeter 0 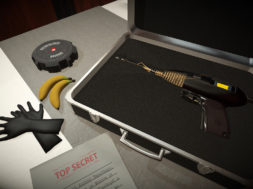 Game developer Catland Ltd. from Finland will be launching a new game called “The Spy Who Shrunk Me” for PC on December 18th with a virtual reality game release during the first quarter of 2019.

The Spy Who Shrunk Me is a stealth game where you are a superspy armed with a shrink ray. The game takes place in 1981. You’ll be sneaking onto a train inbound to Moscow and infiltrate a software company that harbors grave secrets bound to turn the Cold War into a very hot one. Armed with banana peels, airbag mines and the capability to shrink enemies and drop them in toilets and paper shredders, you are the only one standing between the dreaded General Bolscotchkovich and his Soviet army.

You’ll be playing as agent Audrey Smoothspy who is the only agent aloof enough to fight the Soviet army all by herself. Armed with a stolen Soviet shrink ray, an assorted inventory of spy gadgets and some banana peels, you’re the only one affordable enough for the job of saving the free world.

“The Spy Who Shrunk Me is a fully voice acted narrative experience where you get to drive a miniature car, drop people down paper shredders and do other crazy stuff in the 80s Moscow!”, comments Tomi Toikka, CEO of Catland. “Missions range from hacking servers, sabotaging equipment, extracting targets and taking out key personnel to saving the world itself from the Soviet menace! Fans of the old classic No One Lives Forever games can rejoice – this game is a huge love letter to the legendary spy game series.

You can download the game on Steam starting December 18th. The VR version is set to release in the first quarter of 2019 so stay tuned.

tags: catland the spy who shrunk me
previous Here is Awake: Episode One By Vive Studios And StartVR
next List Of VR Cinema That Will Be Featured At The 2019 Sundance Film Festival
Related Posts