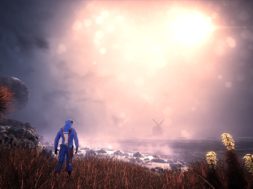 The Solus Project has been out now for over a year on the HTC Vive and Oculus Rift. It’s been well received within the community and has helped spurt the idea of space exploration and foreign planets in the VR realm. But Now the game is available for PlayStation VR users as well.

The re-energized game has just released on PSVR for $19.99. The studio has promised more than 15 hours of gameplay and will allow you to go on epic adventures in deep space. You’ll be facing off against menacing environments that’ll prove to be a challenge.

For those of you unfamiliar with the title, The Solus Project is a single player exploration adventure game where you take on the role of a hero.

Humanity is on the brink of extinction where Earth has been destroyed and mankind lingers on in a small fleet of ships near Pluto. You’ll be tasked with finding a safe haven for a new colony where human civilization and can start over again. But due to unforeseen circumstances with your spaceship blowing up, you are stranded on a deserted alien planet called Gliese-6143-C. You quickly find out that you’re the last survivor of your crew and every other team member is dead.

You have no access to equipment and have no way of communicating or receiving help from anyone else. You become completely and utterly alone.

Desperately you look for a way of phoning home, but as you explore the seemingly desolate planet, you uncover the dark secrets buried within the depths. In this otherworldly odyssey you uncover mystery upon mystery as you try to survive the harsh climate.

If you have yet to play the game, make sure to try it out today. You’ll be in for an exhilarating VR experience. For PlayStation VR users, you will require a minuimum of 5GB save size.