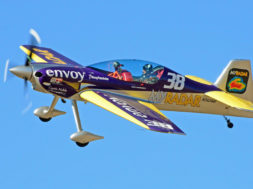 MyRadar, a well-known weather radar app, announced yesterday that they will be debuting their VR Aviation Experience at this year’s Sun ‘N Fun International Fly-In and Expo. MyRadar provides real-time, animated weather radar specific to the user’s immediate area, which is critical in the field of aviation.

“We’ve really been looking forward to Sun-n-Fun this year.  I’m a huge aviation buff, as a pilot, myself,” said Andy Green, CEO of ACME.  “MyRadar is a perfect fit for any pilot on the go looking for a quick-reference pre-flight checkup on flight conditions before hitting the runway… and the VR experience we’re showcasing this year is a phenomenal way for everybody to see what it’s like first-hand in the seat of a real acrobatic plane.We are proud to sponsor 2015 National and 2016 European Air Race Champion, Scott Farnsworth. Scott pilots the MyRadar XtremeAir XA42 throughout the US and Europe competing in low-level pylon racing and helped us capture all the amazing footage for the VR Experience.” 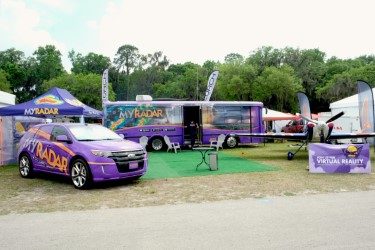 Produced by bRandom Media, the experience lets the user, aka VR pilot, strap himself or herself tightly into the front seat VR version of an XtremeAir, widely known as most advanced certified aerobatic aircraft on the market. The VR pilot finds himself “inside the cockpit of the Race #38, piloted by National Air Race Champion Scott Farnsworth as he does everything from 360 freestyle acrobatics, flying barely above Nevada’s Pyramid Lake at over 230 mph, to executing a Hammerhead and Tail-sliding thrill ride. The VR pilot will experience the thrill of 10G maneuvers as the XtremeAir’s 315hp engine pulls its carbon fiber body through the sky.”

Brandon Kelley, Owner of bRandom Media attests, “this VR experience installation isn’t for the faint of heart. Scott shows off high speed acrobatics, flying through boulders on the bank of a lake, and more. We are taking the experience to the next level with this installation. Turning a normal bus into another world for viewers is accomplished through top of the line headsets, realistic design of the interior, and racecar style seating.”

This year’s Sun ‘N Fun expo began April 4th and will run until April 9th. The annual expo is held in Lakeland, Florida, is the second biggest expo of its kind in the world, as well as FL’s largest annual convention. At the convention, the demo will be played on 4k Pimax VR headsets. Once the convention is over, the Aviation Experience will be available online for VR HMDs and Google Cardboard.