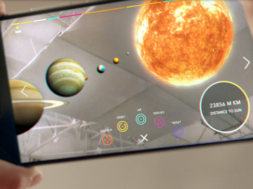 During this year’s I/O conference Google announced that the upcoming ASUS ZenFone AR will be the second smartphone to have the Tango feature on top of supporting Daydream. The company has been planning on releasing the phone exclusively through Verizon this summer. And while an exact date wasn’t announced, we now know that ASUS plans on releasing the phone as soon as end of June or Early July in the US with a launch frame of mid-June in Taiwan.

Engadget sat down with CEO Jerry Shen at Computex who revealed the plans of launch for the ZenFone AR. The Lenovo Phab 2 Pro was the first ever phone to be integrated with the Google Tango technology. ASUS explained that out of the hundreds of existing Tango AR apps, about 40 to 50 of them run stably on their ZenFone AR as of now. They expect the list to grow significantly as the apps are updated for Android Nougat. They plan on having over 1,000 AR apps running on their phone in the next year, hosting AR developer conferences with Google.

Some of the recent updates to Google Tango:

Google’s new Visual Positioning Service (VPS) that couples AR tightly to the real world. The new technology was developed in conjunction with Google Maps that essentially takes GPS indoors. Fully functioning currently, VPS enables users to locate items inside of stores or community spaces. According to the keynote speech, “VPS works today in partner museums and select Lowe’s stores. We think VPS will be powerful in a variety of scenarios. For instance, imagine how precise location enabled by VPS, combined with audio interfaces, could help visually-impaired people navigate through the world.”

Google launched Expeditions, a tool for teachers to take classes on VR field trips two years ago, with already 2 million student users. Later this year, Expeditions will get an AR mode that “enables the ultimate show and tell right in the classroom.” By placing digital objects in the real world, students can explore volcanos, DNA, and more in the comfort of their own classroom.

Google has said that they’re excited to bring AR, VR, and MR to computing in order to make our lives more enriched, exciting, and functional.

The ZenFone AR will feature the latest Qualcomm Snapdragon 821 chip meant to push the boundaries for mobile computing technology. Additionally, the phone will have 8GB of ram. ASUS believes that this phone will provide an amazing AR experience and allow users to utilize the technology in various ways. They plan on keeping the costs for the ZenFone AR under the flagship names such as the iPhone 7 or the Samsung Galaxy S8 Plus.