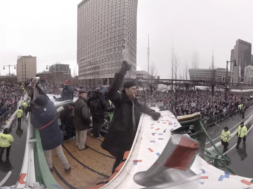 Tom Brady and the New England Patriots are the champions of Super Bowl LI. With the miraculous comeback from the team, the Patriots now stand with 5 Super Bowl trophies. Earlier this week (February 7th) the team celebrated with the Boston community in their Victory Parade around the city.

It was a miraculous site to see as the die-hard fans gathered outside in freezing temperatures to get a glimpse of the players. In the short 360 video, you ride along side one of the most successful athletes in modern history, Tom Brady. You can see the fans screaming and cheering as he passes by. You also get to see the Lombardi Championship Trophy alongside him. Earlier this week, we uncovered that Tom Brady used virtual reality for training purposes throughout the season which played a role in him winning Super Bowl 51.

It’s quite an entertaining video as you observe the fans trying to interact with the quarterback. People by the fences throw the ball at Tom Brady and he manages to throw the ball back to those lucky individuals.

The video was produced by a company called Zudy which is an app development company. If you own a mobile VR headset such as Google Cardboard of Daydream View headset, make sure to view this 360 video in virtual reality.

Boston360 has provided us with an alternative view of the Patriot’s Victory Parade in 360. At the 5:20 mark you can see Tom Brady hitting a white truck with a perfect pass. Boston360 is a New England based production team that works with 360 videos and AR/VR technologies for corporate, industrial and defense customers. Their work is quite fascinating and worth a gander.