Home VR Games The Morrigan Might Be A Fun VR Game To Try Out This Weekend
VR Games
VR News
March 29, 2019 Griffin Streeter 0 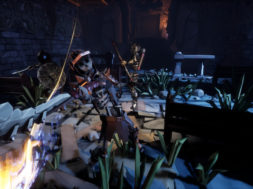 The last weekend in March of 2019 has finally dawned upon us. And while we sing the hymns of goodbye to the final week, we can’t let it go without a final recommendation to a VR game. So meet The Morrigan.

The Morrigan is an action-packed RPG VR game available on the Oculus Rift and HTC Vive. Players will have a chance to step into this fantasy world – torch in one hand, big axe in the other.

A desperate king strikes a deal with the Morrigan to get him out of a tight spot, sacrificing his (unborn) daughter’s freedom. Time passes, and the daughter eventually succeeds the throne. The Morrigan returns to call in the debt… unless you can stop her, that is. But she is a god, so good luck with that!

Below, you’ll see YouTubers such as WhackyCast play the game for what it is and have a great time.

Dramatic combat system:
This is what VR swordplay should be: free-flowing attacks and blocks that allow you to feel the rhythm of combat. Dynamic physics-based melee combat delivers a reaction to every hit.

Can it still be bullet time if it’s with arrows?
Bend time to dodge arrows or strike them out of the air – if you’re fast enough.

Swordplay that’s easy to learn yet challenging to master
Chain blocks and attacks unleash devastating counter attacks that can turn the tide of battle in your favour. Five different enemy attack styles to get your teeth into.

And what would a dungeon be without puzzles?
This new game has got you covered. Keys, switches, hidden rooms – the whole enchilada.

And if heart-stopping peril is your thing…
This game will have you dodging terrifying traps (that you can then use against your enemies) and climbing across death-defying drops.

No time for questing?
Drop into the arena and enjoy wave after wave of enemies – and unlock weapons to use in the main campaign or arena.

A whole armoury of weapons
Tool up with swords, axes, shields, bows – play in whatever style you like, with over 20 weapons to choose from.

A range of locomotion options
Free locomotion, teleport or both supported. Left- or right-handed? Not a problem.

The Morrigan is available today on Steam for $17.99. The game is available on both the Oculus Rift and HTC Vive.

tags: rpg vr game the morrigan the pixel mine ltd
previous New Stormland Trailer Reveals A New Side Of The Game In VR
next Valve Index VR Headset Set For May 2019
Related Posts