The Hype Is Real For Boneworks VR Game 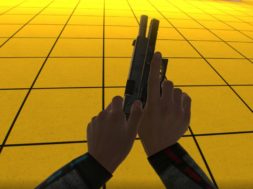 The Hype Is Real For Boneworks VR Game

Just when you thought you couldn’t be more excited about Boneworks, some new content has been revealed that shows how incredible this title may be.

In a friendly partnership with Node, the team has uploaded some new content for us to check out.

In this video you can see some new changes to the environment along with new areas to explore. Around the 3:53 mark you can see the player interacting with a door using a crowbar to try and lock the door. This level of attention to detail is what makes the game so fascinating. You are able to use objects like you do in real life to create solutions unlike other VR titles out there. The weapons are very crisp and have a virtual weight to it where you can feel through the Index VR controllers.

At the 8:37 mark you can see another point in detail with the shading. While the player is high above the ground, it casts a shadow down below including the object he is carrying which happens to be a plant. While there are many games that casts shadows, it’s few and far between to see games that do that while carrying an object around as well that casts shadows.

Boneworks is still under development but Stress Level Zero has created the Steam page for it which states that Boneworks will be released some time in 2019. The FPS VR game will be available on both the Oculus Rift and HTC Vive.