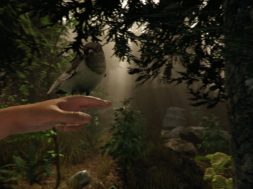 The ever popular game called The Forest by Endnight Games Ltd. have finally released the long awaited VR version of the game.

For those unfamilar, The Forest is a horror survival game that pits you in the middle of a forest after a crash land. You are the lone survivor from the crash and must do everything in your power to stay alive. But as you start to explore, you find cannibal mutants that wants to eat you alive. Your mission is to build, explore, and survive this terrifying situation.

End Games Ltd., promised back in 2014 that they’ll be releasing The Forest in VR. After 4 years, we are going to see that come true. In the V0.73 update release note, one of the devs said, “We’ll also give some details about a VR game mode when we are closer to release. Along with a bunch more we don’t have room to include here, we have some really crazy and fun surprises in store, especially regarding the ending and are really excited to see what people think.” Now the game is finally available in VR through their beta launch.

Some of the highlights of The Forest VR version include:

But according to The Forest game devs, their favourite part of this beta release are the caves. “The caves feel claustrophobic and terrifying and the creatures at scale take on a new life,” said the team.

But many users are already noticing some flaws to the beta VR release. Some of the complains include blurry vision, lack of performance, and the shrinkage of FOV when you walk around. You’ll also notice that the graphics aren’t up to standard at times. If you watch the video, you can notice many of these things.

But that said, the Endnight Games team will continue to improve the game and performance so we have a lot to look forward to. The game itself have over 80,000 reviews with it being mostly positive. You can purchase The Forest today for $19.99 which can be played on both the Oculus Rift and HTC Vive.

tags: endnight games survival game vr the forest the forest vr game
previous VR Games That Are On Super Deep Discount Sale
next You Can Currently Pick Up The Gran Turismo PlayStation VR Bundle For Under $250
Related Posts