The Bold 5 Year Prediction in VR

The Bold 5 Year Prediction in VR

Michael Abrash has developed a lot of knowledge in the realm of VR. He has studied the technology in various ways and personally believes that there’ll be 7 improvements throughout virtual reality technology. Michael informs us that while these might not be accurate to the number, we’ll surely see some form of change in the following fields throughout VR technology. 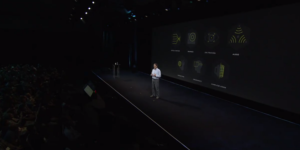 The first vertical he sees changing in virtual reality technology are the Optics and Displays. Currently, we view VR in 1200 x 1080 panel resolution. He believes we’ll be seeing 4K x 4K per eye in the next 5 years.

According to Michael, there’ll be 2 paths in getting to 4K displays for VR. The first method is to generate high pixel density images in a narrower field of view. The second method is to generate lower pixel density image in a higher field of view. Michael believes that we have a stronger path in going with the second option. Currently the Oculus Rift and most other VR headsets have a 90 degree field of view. In the next 5 years, we’ll meet a 140 degree field of view with 30 px/degree according to the Chief Scientist at Oculus. This in turn will allow us to enjoy VR in higher qualities.

Currently, the lenses in VR headsets have a fixed focus of around 2 meters. This is less ideal for people with greater eye sight. In the next 5 years, Michael can see this part of technology improve through the use of Holographic Displays, Light Field Displays, Multifocal Displays and Varifocal Displays. These 4 displays are nowhere near the level of technology needed to improve the fixed focus problem. Michael Abrash believes with improvements in depth of focus + higher resolution + wider field of view + better optics will lead to a comfortable, real and convincing VR. 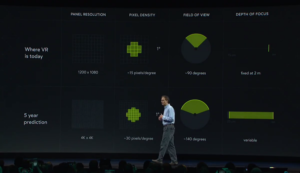 In addition to improving optics and displays, graphics will need to be improved as well. Our fovea sees a mere 3 degrees across. And our resolution falls rapidly away from the fovea. So Michael believes that in order to better enhance our graphics we’ll need to work on Foveated Rendering technology for VR. Foveated Rendering is when pictures are rendered with variable density to match the eye’s resolution.

With this type of technology we can hold less frame rates by only rendering 1/10 of pixels currently used today. But there are challenges in developing this technology. Michael believes that we’d need to totally redesign the technology to understand the full potential of Foveated Rendering. We’d need to construct from the bottom up.

The next hurdle lies within eye tracking. Foveated Rendering requires perfect eye tracking. These are some big obstacles to overcome but it has the potential to become a core VR technology.

Pupils change in size and shape making it hard to track with the current technology available today. Even with today’s level of engineering, there isn’t quite enough samples to display VR correctly through the headsets. Even illuminating the eyes is inaccurate. But in the next 5 years, with the help of bright engineers, Michael can see this problem being solved for VR technology with gradual progression. 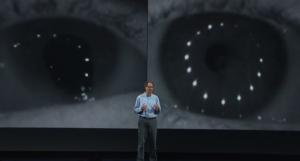 5 years from now, Michael believes that we’ll be able to generate personalized Head Related Transfer Functions (HRTF). This means that we’ll have the same sense of direction and distance for virtual sound that we do for real sound. We currently are seeing small developments towards HRTF but the technology is currently unavailable.

With HRTF, it’ll allow virtual rooms to feel more convincing as you get more immersed with quality improvements in sound distribution.

The current problem in developing this technology is the engineering portion. Sound needs to take into account many variables such as architecture, angles, sound distribution and more. But within 5 years, HRTF can be a core VR technology that heavily improves the experience. 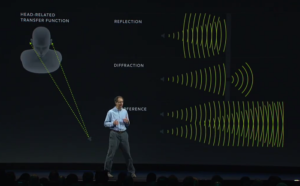 Oculus Touch will be the primary interaction technology for the next 5 years. Controllers like these are capable of displaying gestures through motion tracking. Having the Touch allows people to manipulate their hands into a virtual adoption of it. Michael believes that the only thing that can remotely come to beating out motion controlled sensors are directly integrating some sort of technology to mimic the real hand down to the fingertips. But that involves kinematic technology which is far from being used today.

He believes with the Oculus Touch technology, we’ll see good avatar hand tracking that allows us to disengage from physical keyboards. The controllers will be tuned to the degree where we’d rather choose to type with the controllers rather than using keyboards for VR.

For the ergonomic portion itself, Michael believes we’ll see headsets becoming wireless and reduced in weight. Eliminating the tether will allow you to move freely in VR. But the challenge of becoming wireless will be the limited bandwith. There currently isn’t a technology that can deliver enough bandwith to the wireless headset at the current resolution, let alone 4K display. But he sees it to be solved in the next 5 years.

VR will be revolutionized into mixed reality where we can twirl together the virtual and physical space. The growth in technology will allow us to grab particular things like coffee mugs while enjoying VR. And there will be “No sharp line between VR and reality,” according to Michael Abrash. We’ll be experiencing a mixed reality where Michael simply puts it as, “Augmented VR.”

The two key factors into accomplishing this relies on:

1. Sensing and reconstructing the real world

VR headsets will need to become capable of scanning the physical environment in real time to deliver a threaded world between the real and virtual. This technology will distinguish itself from AR technology where digital images are displayed on glass. AR will not have the capabilities of delivering this magnitude of immersion. And having the ability to include your virtual friends in the Augmented VR environment will be a catalyst to the longevity of the technology.

Michael Abrash delivers a very well-thought out vision for the growth in VR technology over the next 5 years. If these theories were to become true, the level of immersion today will indeed be prehistoric to the one we might be seeing 5 years from now. We look forward to that future as Michael Abrash continues to innovate the industry.