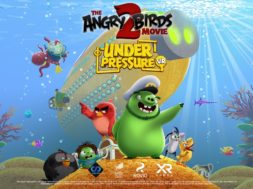 Sony Pictures in partnership with Rovio Entertainment and XR games announced earlier this year that they will be releasing a follow up VR game for the famous franchise. Now the day has come and they have finally released The Angry Birds Movie 2 VR: Under Pressure game. Their first VR game Isle of Pigs was a big hit for VR enthusiasts and they look to follow up on that with this new release.

The team has launched the game exclusively for PlayStation VR (PSVR) users. This new VR game will use the ‘Social Screen’ feature which allows co-op gameplay for up to three non-VR users using the standard dualshock controllers while one user operates the PSVR.

In the game the VR user will take on the role of Leonard, the green pig. You will have to navigate the pigs yellow submarine through a treasure-filled undersea obstacle course. The non-VR players will control the sub’s crew including Red, Chuck, and other new movie characters.

The Angry Birds Movie 2 VR: Under Pressure takes players inside the story of the new movie as the birds and pigs struggle to set aside their differences to overcome a common foe who is dead set on destroying their respective islands.

Players must help the crew make the journey to Eagle Island using the pigs’ giant yellow submarine, and if they can snatch some sunken treasure for piggy leader Leonard.

The game is available now for $34.99. We will keep you informed if the franchise comes to the other VR headsets.