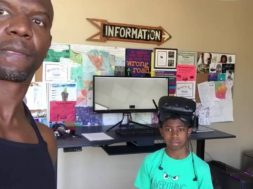 There are many celebrities who currently own virtual reality headsets such as the HTC Vive and Oculus Rift. This includes the likes of Joseph Gordon-Levitt and Jon Favreau who recently directed an animated VR experience. The most recent celebrity (we know of) to join the list is none other than Terry Crews.

Crews is one of the most likable actors who’s made good impressions on the public. Many fans of Overwatch were actually hoping that he be the voice for the newest upcoming character Doomfist. Unfortunately, that didn’t come true. Recently, PCGamer interviewed Crews and asked him about his thoughts on virtual reality.

Going back to your own videos, you posted one last year wherein you and your son test out Job Simulator on the HTC Vive.  For most people the jury is still out on the hardware—it’s expensive and there aren’t an inordinate amount of games available at the moment. What did you think the future holds for the medium?

Crews replied, “It’s totally the future but you gotta work on making the stories as interesting as possible. My family and I just got the Oculus. I’m enjoying how easy it is to get into games with that. The Oculus is actually easier than the HTC Vive. We have both and when we play the Oculus it’s a lot smoother. I do think that once that they can bring some more themed games like, say, Star Wars and stories that we are much more familiar with, I think VR is gonna take off. It’ll be non-stop from there.

You have to get into the programme of more recognisable brands and I think once that happens we’ll be on the right path. I would love if we could do a whole episode of Brooklyn Nine-Nine in VR where it puts you in the precinct. Once we do that I think it’ll go to the next level.”

As you can see, many consumers today still believe that there isn’t enough quality content out on the VR platform. But luckily, this will all soon be changing as there will be multiple AAA VR games launching towards the end of the year. Do you agree with Crews on Oculus being easier and smoother to use over the HTC Vive?