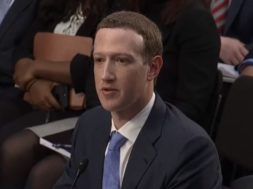 Facebook founder and CEO Mark Zuckerberg was called into a Senate committee hearing on Tuesday to explain his reasoning behind why our data was being sold without a user’s permission. In this instance, he was grilled with questions by dozens of senators and was told to explain why Cambridge Analytica had such easy access to people’s personal information on Facebook.

During the hearing, many questions were pointed towards Zuckerberg and his failure in protecting sensitive information and user privacy. But Senator Ted Cruz took it in a whole different direction by asking Zuckerberg, “Why was Palmer Luckey fired?”

The question itself came during Ted Cruz’s barrage on Zuckerberg where he asked additional questions in regards to blocking and censoring stories from trending news. While these questions were relevant to the topic, the Palmer Luckey question came in as quite a surprise to Zuckerberg.

In addition, Palmer Luckey previously held a fundraiser for Ted Cruz back in 2017 according to LA Times. Luckey was one of the endorsers of Cruz and seemed to have somewhat of a relationship, which is where this question might be stemming from.