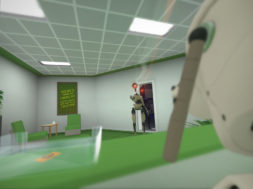 Budget Cuts 2: Mission Insolvency by Neat Corporation is finally available and we are here to celebrate that occasion.

Following up from the successful launch of the original Budget Cuts, the sequel will have you starting out of the TransCorp office alive. But you discover that menial office tasks have been taken over by robots and there needs to be something done about it.

Budget Cuts 2 is the conclusion of the adventure that you started in Budget Cuts, but is also a self-contained game where new players can jump right in. While you were hiding and narrowly escaped certain death in your familiar office environment in the first Budget Cuts, Budget Cuts 2 is all about charging into unknown territory and taking matters into your own hands.

Budget Cuts 2: Mission Insolvency will be available on the Oculus Rift, HTC Vive, and Valve Index for $29.99. Make sure to revisit the adventure and have some fun in virtual reality.