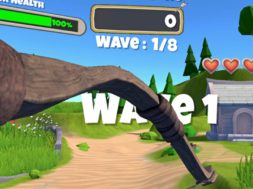 Die Wolf by TomatoVR focuses on the good ol’ story of wolves trying to enter pigs homes. But the key difference between the story and the game is that you’ll be the one who will be having to do the protecting.

In the game you’ll enter a warm, cute cartoon-like space, but you’ll have to go through intense battles to defeat the wolves. You will be putting your archery skills on the line to defend the cute little pigs from the wolves.

The red and green health balloons appear in the middle of the game to make the game easier.

Die Wolf is set to release some time this month in February on the Valve Index, HTC Vive, and Oculus Rift.