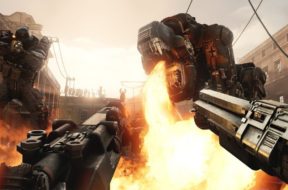 June 10, 2018 Griffin Streeter
1
During tonights E3 showcase Bethesda announced a new Wolfenstein VR game called Wolfenstein Cyberpilot. The game will allow users to play both online and in single player mode. Pete Hines took to the stage to make the announcement and stated that the game will allow you to play as a hacker who can take over […]
Read more