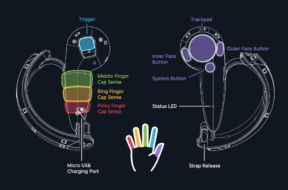 June 22, 2017 SJ Kim
0
Valve has just released more information behind their upcoming VR controller, Knuckles. While we’ve seen some pictures and mock-ups for the peripheral, we haven’t really discovered the in-depth details around it until now. In a publicly shared guide, Steam revealed that the upcoming controllers will have have capacitative trackpad while also have capacitative sensors in […]
Read more