Home Tag "the spy who shrunk me" 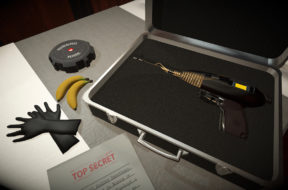 June 14, 2019 Griffin Streeter
0
Back in 2018, Catland Ltd. announced that they would be launching a new game called “The Spy Who Shrunk Me” in VR. To their promise, they launched an early access version in March. But now with further development the studio has launched the full version of the game coming out of early access on Steam. […]
Read more

December 6, 2018 Griffin Streeter
0
Game developer Catland Ltd. from Finland will be launching a new game called “The Spy Who Shrunk Me” for PC on December 18th with a virtual reality game release during the first quarter of 2019. The Spy Who Shrunk Me is a stealth game where you are a superspy armed with a shrink ray. The […]
Read more