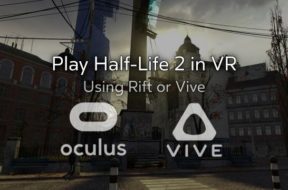 May 15, 2017 Alexandra Sedor
0
Half- Life 2: VR just got greenlit by the Steam Community. The 13-year-old game, commonly praised as one of the “greatest games in history,” has now been reborn for VR as a community mod project which will bring capability to the Oculus Rift and HTC Vive. The project has been in development since 2013. (Check out […]
Read more