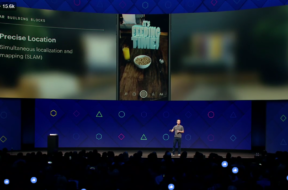 April 18, 2017 Alexandra Sedor
0
This morning marked the opening of Facebook’s F8 developer conference where Facebook CEO, Mark Zuckerberg, announced that they are making “the first mainstream augmented reality platform.” A closed beta version of this platform launches today for specific groups and individuals. According to Zuckerberg, people are moving away from text and embracing the camera’s benefit for social interaction. […]
Read more