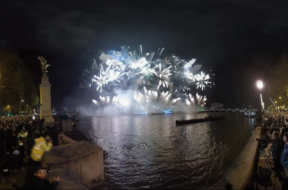 January 2, 2017 SJ Kim
0
NYE is one night out of the year where the whole world celebrates with glamorous parties and colorful fireworks at midnight. And this 2016 – 2017 night, BBC had the chance to capture New Year’s Eve in London by Big Ben (the giant clock tower) and the Millenium Eye (the giant ferris wheel) in 360 […]
Read more