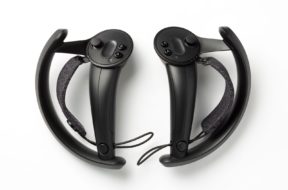 September 18, 2018 Griffin Streeter
0
Valve has announced the launch of the Knuckles EV3 controllers. This is the follow-up from the EV2 edition motion sensor controllers which were released a few months ago. “Since sending these out we’ve received a bunch of great feedback from developers,” said the Valve team. “The team has continued iterating and making improvements, and we’re […]
Read more