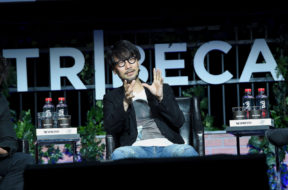 Tribeca Games Festival 2017: Here’s What Hideo Kojima Had To Say About The VR Industry And ‘Death Stranding’

April 29, 2017 SJ Kim
0
At this year’s Tribeca Games Festival, Geoff Keighley, producer of The Game Awards, hosted a keynote conversation with multiple influencers in the video game industry. In particular, Keighley brought on to the stage Hideo Kojima to talk about movies, Death Stranding (his new game he’s working on with Norman Reedus), and virtual reality. Hideo Kojima is famous for […]
Read more

August 25, 2016 SJ Kim
0
In terms of current VR content, there hasn’t been the “Big Bang” movement that’s causing the gaming community to adopt, yet. But now the tables might flip as VR has sparked an interest in the eyes of Hideo Kojima, the long time game designer at Konami. Hideo Kojima worked on blockbuster titles such as Metal Gear Solid and […]
Read more