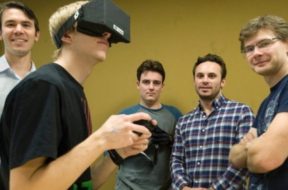 May 28, 2017 SJ Kim
0
This week was full of interesting news. In quite shocking style, HTC launched a brand new VR headset called the Link. In addition to that, Oculus’s first employee has left the company. Make sure to sign up for our newsletters found on the right side of the menu bar.  1. HTC Releases New VR Headset Today […]
Read more

May 24, 2017 Alexandra Sedor
0
Chris Dycus, hardware engineer at Facebook’s Oculus, left the company he helped establish for a new opportunity that he “just can’t pass up”. Dycus has been at Oculus since 2012, while it was still a startup. He was hired around the time of Oculus’ historic Kickstarter campaign for the Rift VR headset, which raised over $2 million. Dycus […]
Read more