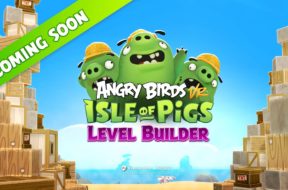 November 6, 2019 Griffin Streeter
0
Resolution Games has announced that they will be adding a level builder to Angry Birds: Isle of Pigs. Angry Birds has been a franchise success for many years and recently have released Isle of Pigs to virtual reality for fans to enjoy as a part of their movie release. The game provides that nostalgic feeling […]
Read more