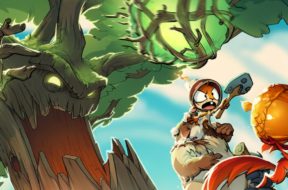 August 13, 2019 Griffin Streeter
0
Update: Acron is set to launch on August 29, 2019. Resolution Games, creators of Angry Birds VR: Isle of Pigs, announced that they’ll be launching a brand new VR title called Acron. This will be a multiplayer party game that will be both competitive and cooperative in nature for players across VR and mobile devices. […]
Read more