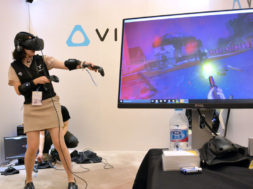 A lot of individuals and companies are taking measures into their own hands to enhance our experience within the virtual world. We’ve recently talked about ‘Sarotis’ by Interactive Architecture Lab who is creating a synthetic skin that helps you feel the difference in pressure in various VR conditions. There’s also companies such as Hapto, Teslasuit, and VRGluv who are trying to bring haptic feedback into the VR space with various solutions. While these are all fabulous ideas, a company by the name of bHaptics (based in South Korea) might be the bread-winner with their upcoming product,TactSuit.

TactSuit comes armed with 87 feedback points powered by eccentric rotating mass vibration motors. These actuators are distributed around the body including the face where you’ll find 7 feedback points. There’s an additional 20 points on the front of the vest with 20 points on the back. The remaining 40 points are distributed evenly across each arm.

Being equipped with so many sensors gives developers a chance to create VR games that are detailed to the touch. For instance, if you were to get shot or feel an explosion, TactSuit can provide force and vibrations to the body with great accuracy.

Another great use of the device would be to interact virtual characters. Something simple as a bird landing on your arms or having someone throw a virtual shoe at your face would definitely get the juice pumping.

bHaptics created an editing software where developers can develop unique feedback points on top of their VR content. They’ve also made the software work in conjunction with Unity.

While many of the listed companies creating haptic feedback solutions are still a work in progress, bHaptics’ TactSuit has already been tested by almost 47,000 people between March and June according to CEO Kiuk Gwak. They opened a test area at Seoul’s Lotte World amusement park where attendees had access to a horror VR game called Zombie Attack.

According to Engadget, bHaptics’ TactSuit didn’t feel too heavy and the sleeves were easy to put on. The only inconvenience was putting the mask on.

TactSuit is currently priced at $549 which is an understandable price point considering its performance and technology with 87 feedback points. But you most likely won’t be able to purchase the full TactSuits as the company is only offering their product to other businesses and developers. They’ll only be releasing the sleeve portion to the public for purchase.

While there are great up and coming solutions for haptic feedback, we’re quite excited to see TactSuit in action in the near future.

tags: bhaptics Kiuk Gwak tactsuit
previous BBC Wants You To Get More Immersive Through Their Taster VR App
next Within Brings A Powerful Story To VR With Giant
Related Posts