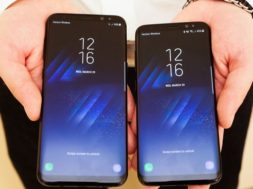 Listen up, T-Mobile loyalists — or those on the market for a new phone, provider, or  Samsung Gear VR. For a limited tie, Samsung is currently offering a buy one get one deal on their new Galaxy S8.

The deal is incredibly simple, free of fine print and strings. Simply purchase two new Samsung Galaxy S8 devices, activate a line on the T-Mobile Network on Samsung.com, and you will be refunded $750 (the price of one phone) within seven to ten days of activation. As an added bonus, they are also throwing in free Galaxy S8 Entertainment Kits for each phone which includes a Clear View stand and 64GB MicroSD card, plus six months of Netflix, equaling a $170 value.

The Samsung Gear VR requires a Galaxy device to operate, so if you are thinking of entering into the VR world, this offer could be a great push to make the commitment. As we reported a couple weeks back, Gear VR took the lion’s share of the VR market in Q1 for 2017 with the shipment of approximately 782,000 headsets according to market intelligence firm SuperData Research. The Gear VR sales more than doubled second place competitor, Sony’s PlayStation VR, which shipped an estimated 375,000 headsets.

It has been thought that Samsung’s Gear VR’s popularity is partially due to bundle deals, just like this one, that make for a financially easier access point to virtual reality. With a mid-range price point and great quality, consumers have been pleased with Samsung’s device.

If you are considering this deal, don’t let it pass you by. Samsung has not set an official end date to the sale, which makes us feel like time is of the essence. You can take advantage of the deal on the Samsung website today.