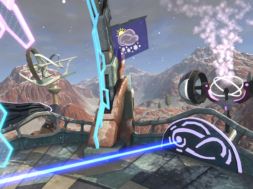 Update: Symphony of the Machine has been pushed back to release on April 25 in North America and April 26 across Europe and Oceania for PlayStation VR and HTC Vive.

There are many themes and genres of games that work well in the VR space and puzzles are one of them. By using your intuitions and crafty abilities, puzzle games really highlights the immersive experience that virtual reality offers. And Spitfire Studios looks to lean on that strength with a VR puzzle game called Symphony of the Machine.

Symphony of the Machine is set in a post-apocalyptic world where you must solve the riddles of a mysterious tower to control the weather and restore life back into the planet. The game opens in a vigorous desert where a lone tower stands in the horizon. The player must explore the desolate world and find the entrance to the structure in order to save the world. You’ll be accompanied by an adorable robot sidekick that grants powerful tools for you to use. He’ll be allowing you to manipulate a beam of light within the tower. By bending, splitting, filtering and directing this beam, you’ll be able to alter the atmosphere.

“Symphony of the Machine‘s subtle storytelling and immersive design encourages the player to experience a new world and experiment with their surroundings at their own pace,” said Vee Pendergrast, managing director of Stirfire Studios. “Much like the theme of restoring life to a broken and fragile planet, the gameplay is a relaxing and enlightening experience.”

While there’s devastation in the desolate world, you will see glimpses of hope with potted seedlings sprouting to life as you implement atmospheric changes. The VR puzzle game will have you traversing through the puzzles and the mysteries of the tower, where you will be revealed to glyphs painted across the walls inside caves. You must discover the secrets to how a once fruitful and lush ecosystem was destroyed and transformed into a desolate wasteland.

A unique characteristic of Symphony of the Machine is that there is no narration in the game. Rather, it’s driven by soothing music and your ability to adapt to the immersive, puzzling world where you must uncover the mysteries. The VR puzzle game is set to launch on April 11, 2017 for the HTC Vive and PlayStation VR for North America and April 12 across Europe and Oceania.