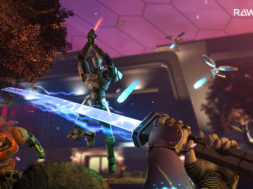 Survios has announced the final release date for their critically-acclaimed early access game, Raw Data. Starting October 5th, Rift and Vive users can download the full version of the game on Steam and the Oculus Store. PlayStation VR users will be able to download the game starting October 10th in North America and October 11th in Europe.

“The most exciting part of Raw Data leaving Early Access is that our players will finally experience the complete story from its classic beginning to its heart-pounding conclusion,” said James Iliff, Survios Co-Founder and CCO. “Throughout the Early Access updates, we’ve been steadily drawing our players deeper into the complex relationship between their SyndiK8 heroes and Eden Corp’s nameless, sinister threat. Now, with Raw Data’s fully fleshed-out narrative, they’ll know who (or what) they’ve been fighting and what they’re fighting for.”

On the PSVR, Vive, and Rift platforms, the game will include Raw Data’s narrative campaign—complete with new level introductions and a climactic final mission. The final version will also include an enhanced graphical update. In addition, the HTC Vive and Oculus Rift releases will include the campaign’s co-op mode as well as the Hostile Takeover Player vs. Player (PvP) content expansion.

“Raw Data’s Early Access period has been amazing for us, not just in terms of its success, but how it helped us grow and evolve the game to this final stage,” said Nathan Burba, Survios Co-Founder and CEO. “The community has been engaged and passionate with us since we launched in Early Access, and their feedback has played an essential role as we turned Raw Data into the ultimate sci-fi VR action experience.”

Raw Data comes with teleportation and locomotion movement. Users have access to various heroes with a variety of weapons. You can wield katanas, bows, dual pistols, and even pump-action shotguns.

The game also features a detailed environment that you can take advantage of. Players will be able to hide behind walls and defend yourself from oncoming attacks.

So far, Raw Data has garnered many positive reviews on Steam. The game is currently available as Early Access for $39.99. We’ll let you know if the price changes.