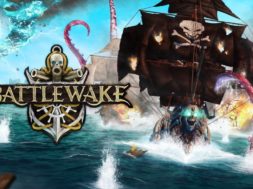 'The Heretic' Shows The Capabilities Of What Unity 2019.3 Provides

Survios – creators of Raw Data and Creed: Rise to Glory – have announced a brand new VR game called Battlewake. This will be a vehicular combat adventure exclusively created for the VR platform.

Battlewake transforms you into four fearsome, super-powered Pirate Lords locked in a constant struggle for dominion over the lush landscapes of New Urth. Each is a figure of myth and might, fiercely devoted to their plundering way of life and the riches it brings in both spirit and treasure. You’ll find out more about each Pirate Lord’s unique backstory and magics in future features.

In the heat of battle, along with captaining an upgradable ship stocked with weapons such as flak cannons, chain cannons, ballistae, mortars, and axe-throwers, you can also channel the Pirate Lords’ ancient powers to stir up exhilarating and devastating chaos. Turn the tide in your favor with massive ultimates: unleash mighty tsunamis, send enemies’ ships flying in maelstroms, destroy hulls with bone spikes, and literally release the Kraken.

There are several game modes available in Battlewake. Players can navigate the epic 20-chapter story of the Pirate Lords’ quest to discover an ancient seat of power in solo/co-op Campaign Mode, or work together to complete co-op objectives in dynamic Warfare Mode. In addition, there will be a free-for-all PvP deathmatch in Plunder Mode (along with the gold you’ll loot from the ships you sink).

You can sign up for the closed beta for Battlewake here. The game is set to release some time this summer in 2019.

tags: battlewake pirate vr survios
previous Flappy Flappy VR Is A Funny Game You Can Have Your Friends Try
next Enjoy This Year's NHL Playoffs By Trying Out Hockey Player VR
Related Posts

VR & FUN @vrandfun Come Aboard The Steamliner In Space https://t.co/pfrQb6XH3A