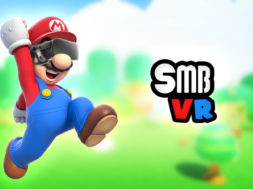 We always talk about how amazing it would be to see an actual Super Mario game in VR. While this is still probably a long ways away, there have been some fans that have been taking it up on their own to create their version of the Mario franchise in virtual reality.

One of those individuals is Nimso Ny who has worked on a variety of Super Mario worlds such as Odyssey and the original version of the game. Recently, he has made some updates to his version of Super Mario VR which allow you to use your hands to crush bricks, stomp on goombas, and collect the coins from the floating boxes.

Nimso Ny also made it possible to control your jump through the use of your motion sensor controllers. By pushing the jump button and moving your hand up in the air, you will be able to jump higher.

One thing that becomes quite apparent is that the Super Mario Bros world becomes 3D versus the 2D world that we are all familar with. So you can move to the side of the road and avoid the Goombas and cliffs.

At the end of the level you will find the iconic flag that you can slide down. And on the side is the castle made of bricks. When you reach the end of the road you will see various signs that indicate further information about this demo VR game.

You can download this Super Mario Bros VR game demo for free today. It is compatible on both the HTC Vive and Oculus Rift so make sure to give it a go. As mentioned, this is fan-made and might be struck down due to copyright issues so make sure to get it while you can.