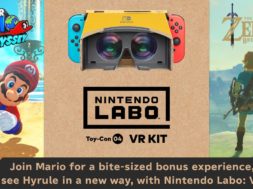 Nintendo has announced that they’ll be releasing a “bite-sized” VR experience for Super Mario Odyssey and Zelda: Breath of the Wild on their Nintendo Labo VR kit.

Last month, Nintendo made an announcement to launch a line of VR goggles through their Labo Kits which is comprised of cardboard box cutouts.

The Labo VR kits will release on April 12th and in preparation, Nintendo has announced these new experiences to go along with the VR kits. Both the Super Mario Odyssey and Zelda Breath of the Wild experiences are set to launch on April 25th.

For the Mario Odyssey VR experience, players will get a chance to revisit the Cap, Seaside, and Luncheon Kingdoms in three new mini-missions. For Zelda: Breath of the Wild, you will get to revisit the Hyrule kingdom.