YouTuber Has Recreated The Super Mario Odyssey Castle In VR 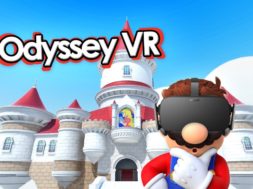 YouTuber Has Recreated The Super Mario Odyssey Castle In VR

Yesterday we talked about some of the games we would love to see in VR and Super Mario Odyssey was one of them. In an interesting turn of events, a YouTuber by the name of Nimso Ny has built the main Super Mario Odyssey castle in virtual reality where you get to sort of experience what that would be like.

The YouTuber states that the castle was made from scratch and built from the ground up. It has taken him about a weeks time to build from the time he released this video.

In the short VR experience, you can walk through Princess Peach’s castle with locomotion movement and see the interior of the building. There are fancy staricases and even an outdoor area you can visit. The castle is floating in the sky among the clouds which also makes it a visually stimulating experience. The YouTuber said that he will be releasing this demo to the public for VR users to check out in the very near future.

However, if they did release a Super Mario VR experience it would probably rock the whole world.