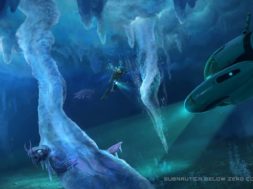 Epic Games has announced that they will  be launching their own marketplace for games that allows users to access their catalogue and other large titles through their platform. And through this announcement, Epic Games will be releasing free games on a frequent basis to attract new users to their platform.

The gaming company who is home to Fortnite will be going against the currently largest platform called Steam owned by Valve. Currently Steam owns the largest marketplace for PC users when it comes to gaming. But with the new incentive that Epic Games is launching they will look to drive attraction to their new platform starting with the free download of Subnautica from December 14 – 27.

For thos unfamiliar, in Subnautica you crash-land on alien ocean world where the only way to go is down. Subnautica’s oceans range from sun drenched shallow coral reefs to treacherous deep-sea trenches, lava fields, and bio-luminescent underwater rivers. Users will have to manage your oxygen supply as you explore kelp forests, plateaus, reefs, and winding cave systems. The water teems with life: Some of it helpful, much of it harmful.

You’ll be able to craft equipment, pilot submarines and out-smart wildlife to explore lush coral reefs, volcanoes, cave systems, and more. And while it may seem safe at first, you’ll quickly realize how dangerous this world becomes. Your main goal in Subnautica will be about survival and finding safety for yourself.

What makes Subnautica stand out so much from today’s open world RPG games is that you’re confined in the water and must battle the elements and creatures rather than a horde of zombies or evil looking monsters who can speak your language. Rather, the story is driven with survival instincts in mind and lets you enjoy an original game.

Subnautica creators Unknown Worlds Entertainment has released the full version of the game this year in VR for the Oculus Rift and HTC Vive. If you haven’t yet got a chance to play the game, you can start by downloading the game for free starting December 14th, just in time for the holidays.