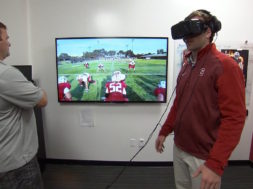 STRIVR Labs announced $5M in new venture funding on Wednesday. The round was lead by Signia Venture Partners to “Move quicker to new innovations,” according to STRIVR co-founder and CEO Derek Belch.

STRIVR also has a branded content division that has created VR Experiences for brands and sports teams to engage with customers, but is very much focused on “changing the way human beings prepare”.

It truly is a fascinating time that we live in as Virtual Reality has proven to be an effective tool for learning, development, and pre game film preparation in the sports arena.

“90 percent of the battle of players at the highest levels—college and the NFL—is just knowing what to do,” says Derek Belch, co-founder and CEO of VR startup STRIVR Labs. “It’s not physically doing it. Everybody’s big, fast and strong. There’s really only a few that stand out relative to the competition. But if you know where to go with the ball, or what to do on your assignment quicker than your opponent, odds are you’re going to win.”

STRIVR is a sports tech company to keep your eyes, and VR headsets, on.