The Story Of Melita Will Take you Across The Universe 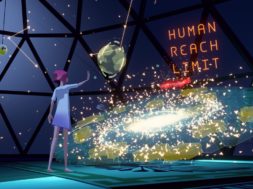 The Story Of Melita Will Take you Across The Universe

This year at OC4, there were many studios in attendance that captivated our minds and throttled our hearts with their ability to tell stories in VR. One of those compelling stories we got to experience belonged to Melita by Future lighthouse.

This story takes place in a dystopian like world where Melita, an advanced AI, and Anaaya, a brilliant female scientist are tasked to find a new planet that humans can inhabit. The two characters are surrounded by snow, ice, and anything else that reminds you of the antarctic. They also have a futuristic spaceship that’s able to travel intergalactic to other planets. It’s hung in the air by some futuristic contraptions which was really interesting to see in VR.

While researching and exploring the desolate planet, the two female characters also take on a personal journey to figure out the meaning of life.

“As the immersive technology industry continues to mature, women are playing an essential part in elevating the medium to reach its true potential,” said Malia Probst, Partner at Women in XR, a venture-capital fund focusing on women-led startups in immersive technology. “The fact that MELITA, one of the most ambitious VR projects to date, features a strong female lead is more than fitting.”

While viewing Melita on the Oculus Rift, you were able to choose from two different camera view angles which allowed you to experience the featured film in different perspectives. The first camera view angle is called the “Director’s Mode” where viewers are guided through the emotion and narrative of the experience in a cinematic way. You’re still able to turn your head in which ever direction but you are dragged through the story with a fixed position by the developers.

The other camera view angle is called the “Dollhouse Mode” which allows you to see everything from the perspective of an invisible giant, setting the point of view yourself. Future Lighthouse also plans to add in subtle details that’ll allow you to interact with different scenes and characters out of the main storyline.

“Melita is a technical challenge like no other, and we wanted to push the limits,” said Roberto Romero, CTO of Future Lighthouse. “Building this in the Unreal Engine allowed us to push the boundaries on all fronts, and add interactive elements to explore throughout the film.

Future Lighthouse plans on making this experience a three part series with the first one being a 24-minute full-feature VR film. Melita was quite an extraordinary journey instantly connected you with the two female characters. You were able to feel their emotions throughout the story with the incorporation of VR.

Melita is available exclusively on the Oculus Rift today for $4.99.