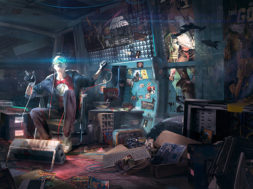 HTC and Warner Bros. have just announced a strategic partnership to bring a VR experience for the upcoming movie Ready Player One to the Vive VR headset. HTC will be the “Official partner for virtual reality content, experiences, and activations for the much-anticipated film,” according to the company.

The Ready Player One movie will be directed by none other than Steven Spielberg who has brought a slate of masterpieces to our screens. The famous director has recently announced his entrance into the VR industry where he will be creating these VR experiences and content.

The upcoming movie is an adaptation from the book written by Ernest Cline, which is set in the year 2044. This particular time and world is in an ugly state where daily life is almost cumbersome to live. The only escape to happiness is to enter a virtual utopia known as the OASIS. But when to creator of this virtual world dies, he releases a video in which he challenges all OASIS ussers to find his Easter Egg, which will give the finder his “fortune. A teenager by the name of Wade Watts (who plays the protagonist in Ready Player One) ends up being the first user to find the clue, which other users will kill him for.

“Ready Player One is one of the most anticipated movies in the world, and has tremendous potential to engage and entertain the worldwide market, showcasing the transformative nature of VR, and what it can and will be,” said Rikard Steiber, President, Viveport. “Vive is delivering on the promise of VR and continues to be the most advanced and immersive VR experience available to consumers, and we’re thrilled to be partnering with Warner Bros. to bring these experiences to consumers, on all platforms, around the globe.”

This exclusive partnership between HTC, Warner Bros., and Steven Spielberg will lead to multiple VR experiences for Ready Player One. The Vive team will be producing various VR content tied to this world and make it readily available for PC based VR users and their upcoming Mobile solution.

“The virtual reality world within Ready Player One is extremely advanced, sophisticated and engaging, and with Vive, we chose the best system to represent the future of VR. Vive is the perfect partner to bring that to life and also has the broadest reach to global markets for the use of VR in home, mobile and offline channels,” said Blair Rich, President, Worldwide Marketing, Warner Bros. Pictures. “We’re delighted that HTC Vive will be partnering with Ready Player One and very excited to work with them leading up the movie’s release in Spring 2018.”

The Ready Player One movie will feature well known actors such as Tye Sheridan, Olivia Cooke, Ben Mendelsohn and T.J. Miller, with Simon Pegg and Mark Rylance. Zak Penn and Ernest Cline wrote the screenplay, based on the novel by Cline.

For those of you interested in reading the novel, Little Book Owl does a thorough job in reviewing the Ready Player One.