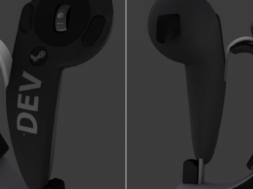 Earlier this year, we covered the story behind Valve and how they’re continuing forward to innovate the VR space. Gabe Newell and his team announced that they’re working on new base stations, new VR controllers, and 3 new IPs for unique VR experiences. Yesterday, while launching the SteamVR Home update, a model for Valve’s Knuckles controller prototype was included.

This new prototype controller for Valve is suppose to recognize finger positioning while allowing users to have a realistic grab and grip in the virtual space. The Knuckles controllers will somewhat be laced around the palm and wrist of your hands with sensors positioned at the top. With today’s controllers found with the Oculus Touch or Vive wand, we don’t have the ability to grab things. Those actions are performed through a series of buttons located on the controllers.

It’s exhilarating to see how quick innovation is happening within the VR space to make it that much better with more immersive tools at our disposal.