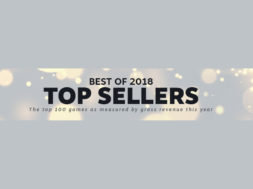 Can you believe it? 2018 has finally come and gone and we are now in the year 2019. If we reflect back, there’s been a lot of great VR game releases and some that are still doing hot from previous years. And Valve has again released their list of the hottest selling virtual reality games.

In 2017, some of the hottest titles were games such as Fallout 4 VR and Raw Data. But this year, all that changes with the release of some new VR games. The rankings are measured by gross revenue for 2018 on the Steam platform.

Some of these games have existed from previous years such as Fallout 4 VR, Superhot VR, Arizona Sunshine, and more. However, VR games such as Beat Saber have been the premiere title for the year which provides rhythmic tunes to jam out and smash to.

One of the other surprising things about Beat Saber is the fact that it garners one of the highest positive reviews for a game on the Steam platform. WIth over 8,600+ reviews, most all exclaim how fun and exciting of a game it has been for people in 2018.

If you have yet to check out any of these titles, make sure to give it a shot as they’ve won many awards for their fun immersive adventures. You can also check out the overall Steam winners here with Farcry 5 rounding out the top.