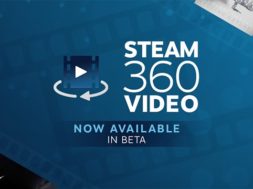 According to Steam Store, “the Steam 360 Video player leverages the Pixvana SPIN Studio technology to enable adaptive streaming in Steam VR, eliminating the need to launch a separate application for playback of linear VR content.”

The minimum specifications for 360 video playback today are basically the same as  for your VR HMD. Check out the general guidelines below:

Currently, there are eight experiences available on Steam (check them out here). There’s some interesting content such as Alien: Covenant In Utero VR experience,  LEGO Batman: The Batmersive Experience, Rooster Teeth’s Red vs. Blue 360 episodes, The Pacific Northwest Ballet’s Silent Resonance, and more.

According to Steam’s article, they are working on supporting playback on a desktop with control and navigation by mouse, for those who do not have a headset.