Star Wars: Secrets of the Empire Hyper Reality Experience Opening At Disneyland With The VOID 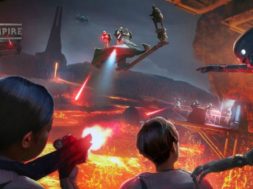 Star Wars: Secrets of the Empire Hyper Reality Experience Opening At Disneyland With The VOID

The VOID, in partnership with Lucasfilm and ILMxLAB has announced that they’ll be launching a new Star Wars: Secrets of the Empire hyper-reality experience. This new experience and facility will open to the public at two new VOID Experience Centers at Downtown Disney at Disneyland Resort and Disney Springs at Walt Disney World Resort beginning this holiday season. Visitors of the resort will be given an opportunity to step beyond reality and into a galaxy far, far away.

“At The VOID, we combine the magic of illusions, advanced technology and virtual reality to create fully immersive social experiences that take guests to new worlds,” said Curtis Hickman, co-founder and chief creative officer at The VOID. “A truly transformative experience is so much more than what you see with your eyes; it’s what you hear, feel, touch, and even smell. Through the power of The VOID, guests who step into Star Wars: Secrets of the Empire won’t just see this world, they’ll know that they are part of this amazing story.”

ILMxLAB, Lucasfilm’s Immersive Entertainment division, will be creating this first of a kind experience, in collaboration with The VOID. Titled Star Wars: Secrets of the Empire, the hyper reality experience will plunge guests directly into the iconic Star Wars galaxy. Guests will move freely throughout the untethered, social, and multi-sensory experience as they interact and engage with friends, family and Star Wars characters.

“At ILMxLAB, we want people to step inside the worlds of our stories,” explained Vicki Dobbs Beck, executive in charge of the division. “Through our collaboration with The VOID, we can make this happen as guests become active participants in an unfolding Star Wars adventure. By combining Lucasfilm’s storytelling expertise with cutting-edge imagery, and immersive sound from the team at Skywalker Sound, while invoking all the senses, we hope to truly transport all those who experience Star Wars: Secrets of the Empire to a galaxy far, far away.”

Star Wars: Secrets of the Empire marks an important milestone in the continued expansion of The VOID, which also joined the 2017 Disney Accelerator earlier this year.