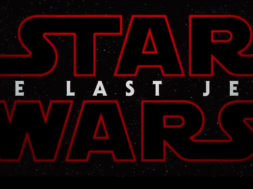 The Star Wars franchise has been celebrating its 40th year anniversary this week hosting a conference in Orlando, Florida. The main producers and cast members from the franchise joined on stage to talk about the legacy in what is Star Wars today.

George Lucas along with Harrison Ford, Mark Hamil, and Daisy Ridley made an appearance and discussed the future of the franchise, which was quite spectacular to see. And towards the end of the show, the Star Wars team honored us by showing us a glimpse of the new upcoming movie Star Wars: The Last Jedi.

The team released an official Teaser for Star Wars: The Last Jedi where you can see Daisy Ridley on an island with Mark Hamil. She looks at though she is now the new apprentice to Luke Skywalker and learns the way of the force. John Boyega who plays the main character named Finn seems to be in some cryogenic chamber getting some treatment.

You’ll also see the glorious dog-fight taking place in outer space between the forces of good and evil. And you can’t leave out Adam Driver, the main antagonist in the movie playing as Kylo Ren. We hope you enjoy the trailer as much as we did!