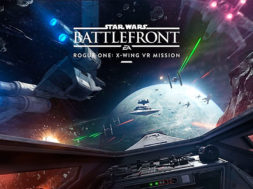 Star Wars continues to be a big hit this holiday season with the upcoming premiere of Rogue One: A Star Wars Movie. And in anticipation to the release of the forecasted blockbuster hit, EA and Star Wars teamed up to release a gaming VR experience called Star Wars Battlefront Rogue One: X-Wing VR Mission.

This will be an exclusive title coming to PlayStation VR on December 6th. It’ll be free for all owners of the Star Wars Battlefront game for PS4. Many avid fans have been waiting for a Star Wars experience piloting X-wings in VR and they won’t have to wait much longer. The game will be comprised of various missions and won’t simply be a short experience that only lasts a short duration. You’ll be in a dog fight through the intergalactic trenches with some of the most notable ships in the Star Wars universe.

The game was collaborated in partnership with Criterion Games and DICE to to celebrate the long living franchise. Through this snippet you can tell that it’ll be a fight of good versus the evil; the empire versus the rebels.

While PlayStation VR doesn’t provide the video quality of the Oculus Rift or HTC Vive, it is one of the hottest selling headsets due to the popularity of the PS4 console. With many more exclusives coming to the PlayStation, we’ll see how the rivalry plays out between the headset manufacturers.