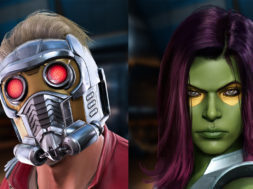 What do you know, more superheroes are joining Marvel Powers United VR! This time it’s Gamora and Star Lord from Guardians of the Galaxy.

If you’ve watched any of the of the Guardians of the Galaxy movies or the recent Avengers movie, you have seen these two characters in action.

A headstrong intergalactic adventurer, Peter Quill was taken from his Earthly home at a young age, growing up in outer space alongside the pirate-like alien Ravagers. As the intrepid Star-Lord, Quill travels the cosmos seeking his fortune. Equipped with a high-tech elemental blaster and a mix-tape of music from home, Star-Lord leads an unlikely, ragtag group of misfits – the Guardians of the Galaxy – in their attempts to do a little good, a little bad, a little of both!

Orphaned as a child when the rest of her species was annihilated, Gamora Zen-Whoberi was found and raised by the tyrant Thanos, who conditioned her to become an unparalleled warrior. Weary of the merciless acts she was forced to commit in her would-be father’s name, Gamora later broke free of her chains. Teaming up with Star-Lord and his motley crew, “The Most Dangerous Woman in the Galaxy” now seeks to redeem her past crimes, putting her deadly combat skills to use as a member of the Guardians of the Galaxy. Whether wielding the cosmic blade Godslayer or a sturdy blaster, she is a force of reckoning.

Marvel Powers United VR is set to release on July 26th for $39.99 through the Oculus store. This is an exclusive title for Oculus and will be playable on the Rift.