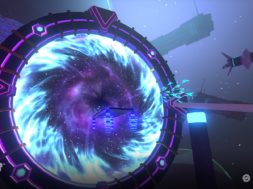 Survios has just launched a big new update (v1.3) for Sprint Vector which features a lot of improvements and changes. While we thought that the game was exciting as it is, we will heading into the heart of the neighboring Moebius 3-15 black hole itself.

And nearby the black hole is a top secret location where you’ll be facing off in the most challenging course: Cosmic Odyssey. On top of the new map are two new characters who have joined the race.

The first character’s name is Rockslide who is joining Luna in the “space stuff gone sentient” category. He was met by Mr. Entertainment and struck a deal: if he wins, he gets a shiny new bipedal body. But if he loses, Mr. E gains all the secrets of the known universe. You decide which option is better.

The second character’s name is Necho who contains multitudes within her half-machine body. Her name is that of a planet long consumed by its neighboring sun, whose doomed denizens fused their consciousnesses into their undying queen. She hopes that victory in Sprint Vector will restore her long-lost home and allow the souls within her to live once more.

Another big update features is the new leaderboard mode. Survios is adding Pure Leaderboards for all maps, so players conducting solo runs without items and AI can compete against each other. They are also wiping out all current leaderboards.

These changes come ahead of ESL VR League Kickoff which starts on June 4th for a month long ladder. Finals will be taking place on stage at Oculus Connect 5 in October.

You can download Sprint Vector V.1.3 on May 30th at 12PM PST. The game is available for both Oculus Rift and the HTC Vive for $29.99. Make sure to get your sprint on in space.