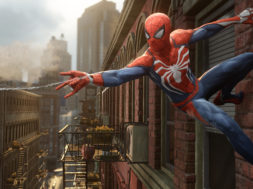 Sony has recently released Spider-Man: Homecoming VR Experience for playstation VR where you’ll be slinging the web just like Peter Parker in the movies. Guided by the helpful artificial intelligence unit built into the new Spider-Man suit, Spider-Man: Homecoming VR offers players the chance to suit up as the superhero, hone your web-shooting skills, and sling high above New York City in pursuit of the Vulture.

The experience itself is quite short lasting around 5 minutes with limited capacity in movement. You’ll first start the game by putting on the Spider-Man suit from a special case. Then you’ll learn how to aim and shoot the web at different objects such as balloons, bottles, bricks, and cans. This practice session will later be graded dependent on your aim and speed.

You’ll also be learning how to latch on to objects with your spider-webs to fling it across distances. Quickly after, you’ll be alerted about an alien life-form that’s quickly approaching. So you sling on to the crane above you to quickly quarrel with ‘The Vulture.’ With his unique evil-like suit he chops off a portion of the crane where you must sling back together to save the environment below you.

“Spider-Man is the most beloved superhero in the world, so we knew Spider-Man: Homecoming VR had to be something special. Fans can wear the suit, fire the new web shooters – THWIP! – and swing through the air in a faceoff with The Vulture. It’s every fan’s fantasy turned into virtual reality,” said Jake Zim, Senior Vice President, Virtual Reality at Sony Pictures.

The experience itself felt short of what we would’ve liked to see from such an iconic character in a game. It’s rather something that no-one will want to play again after trying it out once. The Spider-Man Homecoming VR experience is basically a tutorial with nothing to look forward to.

However, Spider-Man: Homecoming the movie looks quite promising. The movie is set to release on July 7th so make sure to check that out!