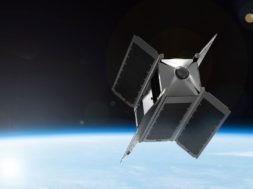 We’ve discussed VR and NASA before, but this time we’re getting a little more literal with the term launch — we’re discussing an actual space launch (a SpaceX launch to be exact) vs the launch of new software. Pretty exciting stuff!

This August, SpaceVR is sending up a large thermos-sized cylinder housing 8 cameras which will capture two to three hours of 360-degree footage each month over the course of 9 months in low orbit. After those 9 months, the device (pictured below) is set to fall back to Earth, burning up on its adventure back down. All of its recorded information will be received via X and S microwave radio transmissions, prior to its fiery demise.

SpaceVR CEO Ryan Holmes explained to Mashable that this project was inspired by a book called The Overview Effect. “It’s about this thing that happens to astronauts. When they go into space, they have this really deep, emotional feeling, it’s almost like they’re awakening to the universe. I saw what happened to the astronauts after that experience. I saw them as being much better people, much more connected to other people [as a result of] seeing our place in the universe. I realized that once that happens to everyone, we’ll fundamentally live in a different world as a species, because we’ll all think differently. My goal is to catalyze that [astronaut experience] by sending this VR camera into space so people can really see what it’s like.”

Once the footage is obtained, SpaceVR says it should be released by the end of 2017, and available on the Oculus Rift and HTC Vive. Holmes is hoping that this experience will have a positive impact on humanity, inspiring a better sense of perspective as well as attachment to fellow man and the universe.

Mashablereports that this project was financially very steep, and took multiple rounds of funding, as the initial Kickstarter campaign (just over $100,000) was not enough. Last year, China’s Shanda Group helped Space VR by providing them with the majority of their funding which clocked in around $1.25 million. Additional funding just came from HTC Vive’s recently announced VR for Impact fund, which is dedicated to investing in VR projects that are designed to have a positive impact on society.